Recently, Elon Musk closed the deal of buying Twitter, which has led to a hike of Dogecoin to a level as high as 185%. Elon is known as a Dogefather because of his enthusiasm for the coin and that made people hope that soon it will reach a $1 price that’s why more than 350,000 addresses have bought 64 billion Dogecoin at an average cost of $0.092.

In total, around $5.86 billion worth of Dogecoin was bought around this time, even at a high price of $0.126317. This information about buying 64 Billion Doge was shared by Ali who is a crypto analysis expert through his Twitter post where he mentioned the whole data and the chart on 3 November, a day after the big hike. 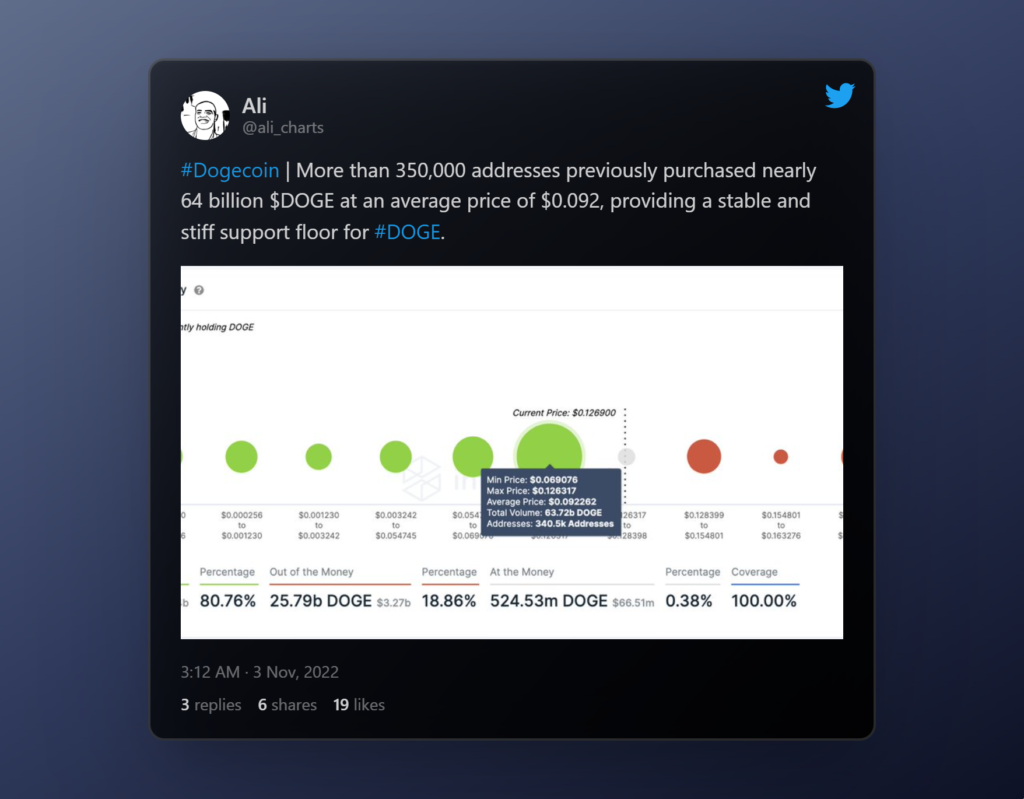 At the end of October, Dogecoin surprised the cryptocurrency market with an amazing surge. The price of DOGE was 185% higher on November 2 after reaching a high of $0.158 compared to where it had been trading all summer.

There was a lot of excitement when, after more than eight years, an inactive address containing 2,374,814 DOGE valued at $338,611 came back to life.

Not only we got to see its increased price of it, but it also caused its market capitalization to surpass Cardano’s, allowing it to move up to the eighth position on Coinmarketcap’s list of top cryptocurrencies.

Even with this price adjustment phase, the canine-themed or the dog-themed crypto is still up an astounding 84.93% over the past 30 days. In that particular area, it continues to be the asset with the biggest growth, exceeding even Bitcoin (6.19%) and Ethereum (17.98%).

What are people saying about this DOGE hike?

Santiment, an on-chain analytics company, said through a Twitter post that social indicators could indicate that Dogecoin has the opportunity to expand even further. It mentions how low the current search trend level is in comparison to the peak that was seen in May 2021. Additionally, the traditional scenario of a significant social volume increase signaling a probable top and rising mood could suggest that traders are optimistic in their views on this meme coin.

Gokhshtein Media founder David Gokhshtein also stated that there is a chance Doge would continue to rise and reach its all-time high of $0.7332 if Elon Musk moves forward with his ambitions to integrate Dogecoin with Twitter. Gokhshtein tweeted, “If it’s true from Elon’s hint yesterday about possibly implementing DOGE into Twitter, it easily will pass its ATH

Binance contributed $500 million to support Musk’s takeover, and recently introduced the “Bluebird Index,” a cryptocurrency index that monitors the performance of its own native token, $BNB, as well as that of Dogecoin and a lesser-known coin called Mask Network ($MARK). Social media users speculated that Binance is hinting at the coins that will be a part of a future Twitter integration into Web3 based on the name and components of the index.

People are keeping their high hopes for Elon Musk at the moment as he has made this hike possible because of his continuous support for crypto, now people are waiting for him to change Twitter into a crypto-friendly platform.

Dogecoin is continuously in demand right now, even though some small dips might get seen in a day but it’s still holding the hike rest of the time. Even though the market seems so favorable for buying this crypto, you should do your own research before making any decision as crypto is volatile.

For more content related to cryptocurrency, check out the Suncrypto Academy.