FIFA To Launch NFT Platform For The Upcoming World Cup 2022

FIFA world cup 2022 is all set to happen in Qatar and to make it even special FIFA will be collaborating with Algorand to develop an NFT platform for football fans. This will happen at the end of the ongoing month and the fans will get the NFTs of all the memorable moments, images, and art from the matches.

The World Cup will also feature digital collectibles of memorable events.  This will increase the excitement of people for the FIFA Worldcup which is only 1 month away. This will be the perfect mixture of the two most loved and trending things as in Worldcup and NFTs, and all the important moments will become collectibles for fans which will make it even more valuable.

FIFA+ Collect portal will be responsible to feature “cheap, inclusive, and accessible” NFTs that incorporate famous soccer moments, artwork, and photography when it launches later this month.  FIFA+ is the organization’s portal for live soccer matches, news, games, and original content, and will now host the NFT platform as well.

The information about this has been posted on the official Twitter account of FIFA+ Collect, and the fans are showing huge interest in gaining high-quality NFTs from the FIFA team. 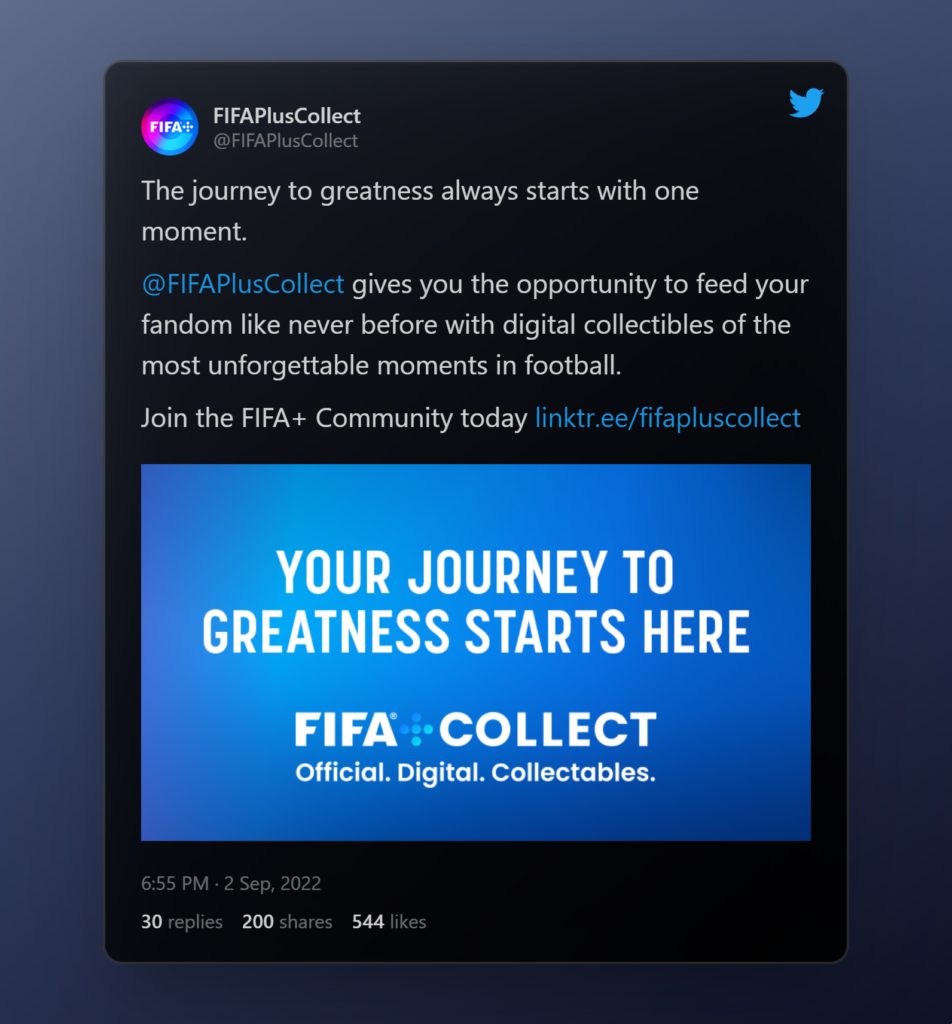 Top Shot has been using IP from the NBA, NFL, and UFC to manufacture in-game moments as NFTs.

FIFA+ Collect will be available at launch on all web-enabled and mobile platforms. It will initially be available in three language editions: English, French, and Spanish, with plans to add more languages in the future.

In a statement, FIFA’s Chief Business Officer Romy Gai said, “Like sports collectibles and stickers, this offers an accessible chance for fans around the world to engage with their favorite players, moments, and more on new platforms.”

The organization’s interim CEO W. Sean Ford remarked, “FIFA’s commitment to bridge to Web3 facilitated by Algorand is a reflection of their inventive spirit and ambition to directly and seamlessly communicate with football fans.”

Before the FIFA World Cup 2022 in Qatar, FIFA and the blockchain technology company reached an agreement on sponsorship and technical collaboration in May. The Women’s World Cup will be held the following year and will also be covered by the agreement made with Algorand.

Soon, more information about the collections will be made public to the audience on FIFA+ Collect. The hints about the kinds of NFTs that are going to be published throughout the World Cup will be described through a teaser.

A non-fungible token (NFT) is a record on a blockchain that is connected to a specific digital or physical asset. Since the owner can transfer ownership of an NFT, the NFT can be sold and traded.

Anyone can construct NFTs, and they don’t normally need any coding knowledge to do so. NFTs frequently make references to digital items including images, movies, and audio. Unlike bitcoins, which are fungible, NFTs are uniquely identified assets.

What more will be seen at this FIFA World cup?

This November in Doha, there will be more cryptocurrency-based companies besides Algorand. Crypto.com announced in March that it would be the sole cryptocurrency exchange sponsor of the World Cup. The business, however, may be scaling back its ambitious plan for sports collaborations after reportedly canceling a $495 million sponsorship agreement with UEFA, the European Champions League, earlier this week.

Algorand already gained attention earlier this year when it bought the digital music-sharing service Napster and teamed up with LimeWire, which was once its peer-to-peer music service. And recently debuted a music-focused NFT marketplace showcasing the works of artists signed to Universal Music Group’s label. It is a low-cost and carbon-neutral blockchain.

For more content like blogs, news, market updates, and any relevant information related to cryptocurrency, check out the Suncrypto Academy.