The Tether operation limited announced the news of Tether (USDT) being supported by the Polkadot blockchain on Thursday. It has been already added to the Near Protocol on 12 September, and the news is announced recently only. Tether is the third largest cryptocurrency and is known to manage the largest stablecoin asset worldwide with a market cap of ₹5,521,276,993,888 and with a price of ₹81.25 on 24 September.

With this addition to the Polkadot chain, USDT is now hosted on 11 blockchain networks which include Standard Ledger Protocol for Bitcoin Cash, Avalanche, Kusama, Ethereum, Solana, Algorand, EOS, Liquid Network, Omni, Tron, and NEAR. 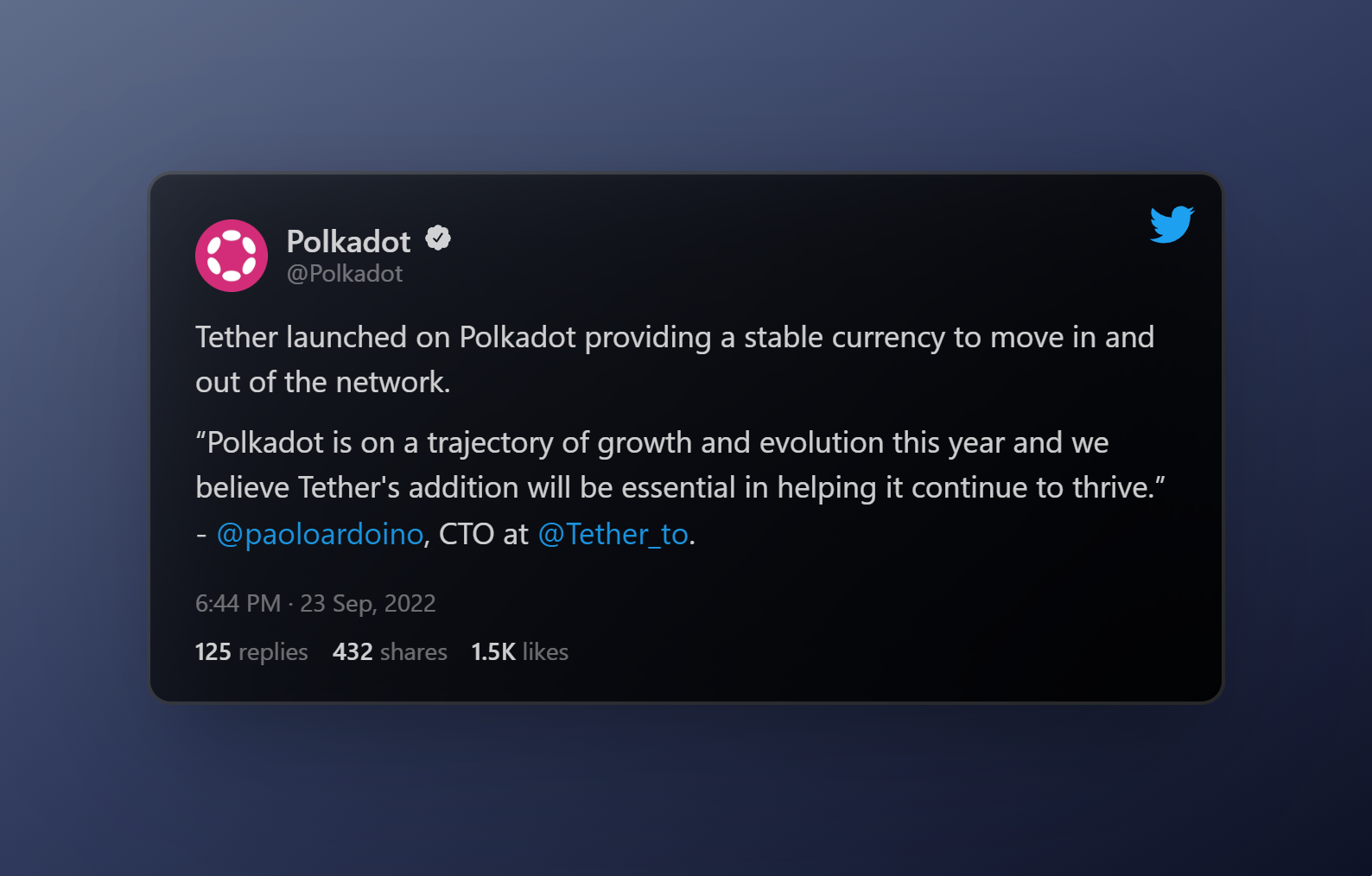 On this news, Paolo Ardoino, CTO of Tether, said, “We’re excited to release USD on Polkadot, providing its community access to the most liquid, reliable, and trusted stablecoin in the digital token industry. This will allow USDT to move in and out of the Polkadot chain freely.

“This year, Polkadot has been growing and changing, and we think that Tether’s addition will be crucial to ensuring that it prospers even more.”

How this addition to Polkadot will be beneficial to the Tether?

Through the Polkadot Relay Chain, Polkadot enables separate blockchains to communicate data and make transactions in a secure and trustless manner, simplifying the development of decentralized apps, services, and institutions. With that USDT will be a part of this as well.

It will also reduce any potential negative effects brought on by market volatility (crypto volatility) and will offer it to move in and out of the network to generate yield.

What is the Lawsuit issue with Tether?

A lawsuit is filed because of the unbacked USDT which caused damage of $1.4 Trillion in the market. Five plaintiffs filed a complaint three years ago in regards to that and claiming that Tether intended to release the stablecoin as part of an effort to raise the price of bitcoin.

For that, a U.S. judge recently in New York ordered Tether to provide financial information in regards to the backing of Bitcoin (BTC).

According to the order, Tether must provide “general ledgers, balance sheets, income statements, cash-flow statements, and profit and loss statements,” as well as a list of all transactions it has made involving cryptocurrencies or other stablecoins, including the dates of such transactions.

Additionally, it directs Tether to disclose information on its accounts with Bitfinex, Poloniex, and Bittrex. The debate, according to Tether, was only about the size of the paperwork that needed to be submitted. Tether also added that “We had already promised to produce the documentation necessary to prove the reserves backing USDT.”

The order was later described by Tether as “normal discovery” and in no way it proves the plaintiffs’ allegations.”

Polkadot is ranked 11 on the coinmarketcap and is trading at the price of ₹521.40 on 24 September with a market cap of ₹583,686,476,721. Polkadot blockchain was launched on 26 May 2020 by Ethereum co-founder Gavin Wood. This is based on the Proof of Stake consensus mechanism. It is not only a cryptocurrency but also a blockchain that connects different blockchains, DeFi, and Web3 universes to each other which means it acts as a connector.

This way it makes it easier and more convenient for using multiple blockchains at the same time. According to Sentiment which is an on-chain analytics firm, Polkadot is a leading blockchain in terms of weekly development.

For more content related to cryptocurrency check out the Suncrypto Academy where you can find recent news, blogs, informational content, market updates, and much more.