During the event with the BFSI summit which was organized by Business Standard in Mumbai, he took the FTX as an example  to point out that “Cryptocurrencies have huge inherent risks for our macroeconomic and financial stability.” Shaktikanta Das further said that

“We firmly believe that cryptocurrencies have no underlying value and have a huge inherent risk for our macroeconomic and financial stability.”

He clearly stated that in his opinion cryptocurrency should be banned not regulated. 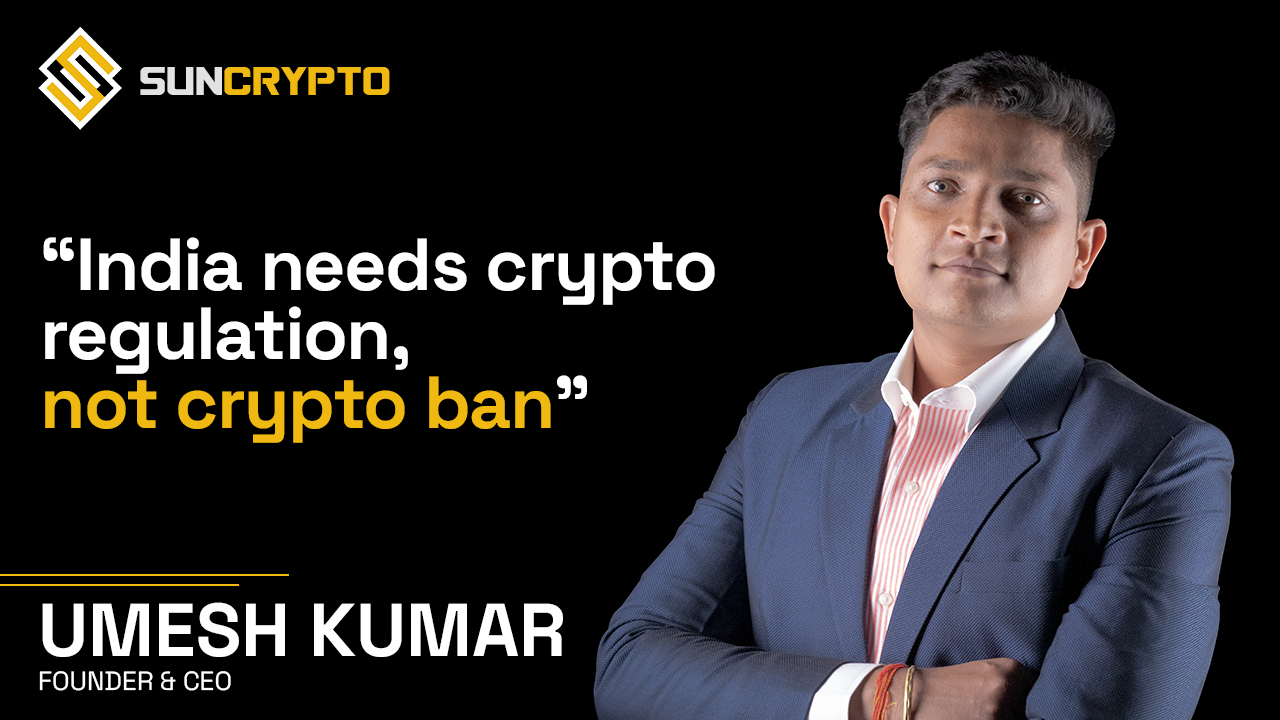 Suncrypto’s Founder and CEO, Mr. Umesh Kumar has been the biggest crypto fan for a long time. His enthusiasm started in his college life. According to Mr. Umesh Kumar, this is not the first time the RBI governor has talked about banning cryptocurrency. It has happened before and will happen in the future as well until government succeeds in regulations.

He shared his view on cryptocurrency as

“Every technology has both positive and negative sides, it is on the people to work on the negative sides and work on developing the positive sides more. We have seen many examples of this like when the Internet came first, people were having biased opinions about this as well. But today we can see how great this technology was. It is not like it doesn’t have any negative points but the positive points are so great that no one can imagine their lives without it. “

Mr. Umesh Kumar said cryptocurrency is lacking a little so it requires more development and proper regulation, not a ban.

Indian government applied a 1%TDS and 30% tax on cryptocurrency earlier this year and by the recent data, it is seen that the government collected around ₹60.64 Crore from the collection of 1% TDS only.

Now, this is when the volume of crypto exchange is down by 90-95%. I can only imagine how much it will be in case the volume will be back to normal. TDS is also the reason for the exchanges to suffer from low volume. I will suggest that if the percentage of TDS drops from 1% to like 0.001% this will increase the volume of exchanges. And that way the government will be collecting more from TDS regardless of the low percentage.

And this leads to many questions for the users “if the government is against it why they are collecting the tax on cryptocurrency in the first place itself? With their continuous efforts government has been creating a negative image in front of Indians but at the same time, they want a tax on the profit generated by the crypto users.“

It is as if there is a small issue with crypto the government wants to get rid of it but I guess cars are polluting the environment through various means. Also, they are creating traffic on roads which means cars should be banned as well.

I think I do understand that cryptocurrency is not simple to fully legalize without considering all points. But with cryptocurrency, we have blockchain as well and the use of blockchain is huge at the time. This year we got to see so much blockchain adoption in India, especially talking about the Polygon. I do have some expectations from the government to understand the features and use case cryptocurrency and blockchain have. And the best way to deal with it is with proper regulations and guidelines.

Whatever the government decides, Suncrypto will be taking all the measures to provide the best services to its users. We believe soon some good news will be presented by the Indian government about proper crypto regulation.

2 thoughts on “RBI Governor Took Another Shot On Cryptocurrency”

Weekly Crypto Market Report As Per 30 January
Pooja Khardia
Shaktikanta Das, governor of the Reserve Bank of India is known for his strict personality on the cryptocurrency…
Read More

Vitalik Buterin’s Addressing The Big Privacy Challenges On Ethereum
Pooja Khardia
Shaktikanta Das, governor of the Reserve Bank of India is known for his strict personality on the cryptocurrency…
Read More

Weekly Crypto Market Report As Per 23 January
Pooja Khardia
Shaktikanta Das, governor of the Reserve Bank of India is known for his strict personality on the cryptocurrency…
Read More